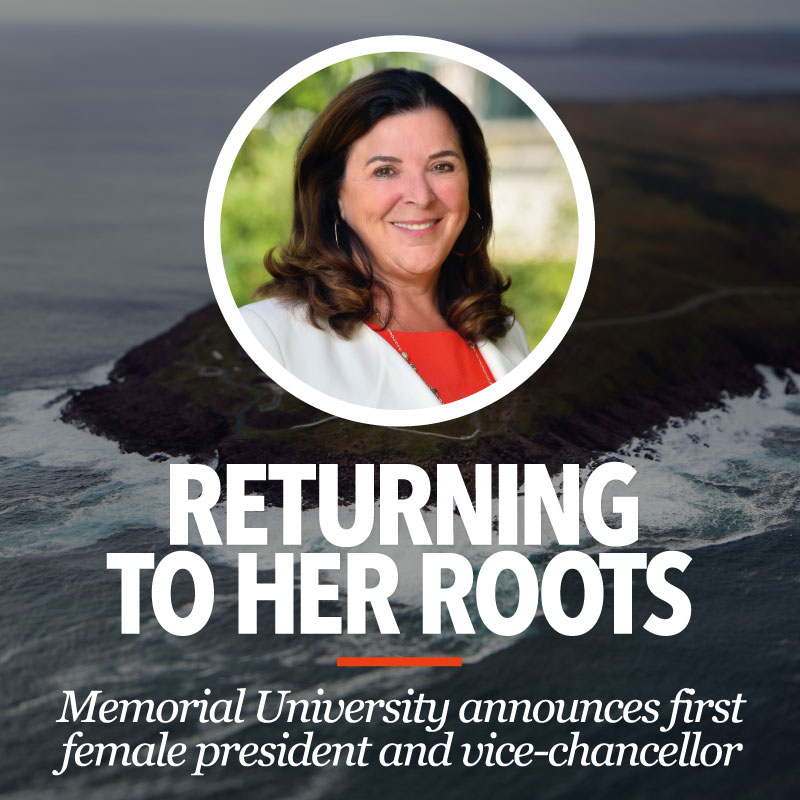 Returning to her roots

The Board of Regents of Memorial University of Newfoundland today announced the appointment of internationally renowned academic and scholar Dr. Vianne Timmons as the 13th president and vice-chancellor of Newfoundland and Labrador’s only university, effective April 1, 2020.

President Gary Kachanoski has agreed to continue leading the university until March 31 to ensure continunity and a seamless transition.

The announcement of Memorial’s first female president was made by Iris Petten, chair of the Board of Regents and chair of the university’s Presidential Search Committee.

Dr. Timmons grew up in Newfoundland and Labrador and spent her early teaching career in Alberta and British Columbia. She moved to Atlantic Canada in 1992 to join St. Francis Xavier University, where she was the chair of the Education Department. In 1996 she joined the Faculty of Education at the University of Prince Edward Island and became vice-president, academic development, in 2001, a position she held until becoming president and vice-chancellor of the University of Regina in 2008.

Dr. Timmons is currently serving her eleventh year at the helm of the University of Regina. A scholar in family literacy and inclusive education, Dr. Timmons is also an officer of the Order of Canada and the 2019 recipient of the Indspire Award for Education.

“On behalf of the board and the entire Memorial University community, I offer a warm welcome home to Dr. Timmons,” said Ms. Petten. “I am so pleased to introduce her as our university’s next president and vice-chancellor.

“Dr. Timmons brings a wealth of experience focused on areas of importance for Newfoundland and Labrador’s only university: student success, high impact research, commitment to communities, Indigenization, and diversity and inclusion,” Ms. Petten continued. “The board looks forward to working with her and the other members of Memorial’s leadership team as we embark on the next decade of success at Memorial.”

“Memorial has a strong reputation for leadership in research, teaching and public engagement,” said Dr. Timmons. “I am excited to join faculty, staff and students, as well as the communities Memorial serves, to help further the good work that has been a hallmark of this wonderful institution for nearly a century.

“This is an exciting time for me both personally and professionally,” Dr. Timmons continued. “I am grateful to be returning to my roots in Newfoundland and Labrador, and honoured to take on this tremendous opportunity at Memorial.”

Ms. Petten notes that the search process was comprehensive and inclusive.

“Guided by the board’s Presidential Search, Appointment and Assessment policy, we formed a representative search committee, we consulted widely inside and outside the university and we kept our communities informed as we moved through the search process,” she said.

“The interest in this position was outstanding, with excellent candidates from leading national and international academic institutions. This reflects well on Memorial’s reputation as a great university. After lengthy and thoughtful consideration of the candidates, the search committee unanimously selected Dr. Timmons.”

Ms. Petten says that in accordance with the Memorial University Act, the Senate of the university, the institution’s academic governing body, has been consulted on the appointment and the provincial government has received and accepted the Board of Regents’ unanimous recommendation for appointment.

“We brought forward one name to government and I am pleased to say that the recommendation was heartily endorsed,” said Ms. Petten.

As part of a five-year contract, Dr. Timmons will receive an annual salary of $450,000 plus $34,000 in allowances including transportation and housing for a total of $484,000. Ms. Petten notes that this is in line with compensation at other comparable Canadian universities, including Memorial. The president designate’s employment contract will be posted on the university’s website once she has officially taken on the role in April, as is Memorial’s practice.

“I want to thank all those who assisted us in this process, with special thanks to Odgers Berndston search consultants and the Presidential Search Committee for the hard work they undertook in bringing this complex search to such a positive conclusion for the university and the province,” said Ms. Petten.

She comes to Memorial from her role as the seventh president and vice-chancellor of the University of Regina. Since Sept. 1, 2008, Dr. Timmons has taken a leading role in establishing the strategic direction of that university, helping the institution enhance the positive impact it has on the provincial community.

Dr. Timmons maintains a wide-ranging research program, with particular emphasis on family literacy and inclusive education. She is active in the academic community regionally, nationally and internationally, including having served in the past as president of the International Association for the Scientific Study of Intellectual and Developmental Disabilities; co-chair of the Social Sciences and Humanities Research Council’s Advisory Committee on Equity, Diversity and Inclusion Policy; chair of the Canadian Bureau for International Education; and member of the board of the Institute for Research on Public Policy. She is currently a member of the Business/Higher Education Roundtable and the Canada Foundation for Innovation, among other appointments.

During the course of her career, Dr. Timmons authored or edited nine books, written more than a dozen book chapters and authored more than 40 peer-reviewed articles in leading academic journals. She has been either the principal investigator or a co-investigator on more than 30 funded research projects, presented more than 200 invited lectures about her work and written policy briefs and opinion-editorial pieces on a variety of issues.

Dr. Timmons grew up in Newfoundland and Labrador and spent her early teaching career in Alberta and British Columbia. She moved to Atlantic Canada in 1992 to join St. Francis Xavier University, where she was the chair of the Education Department. In 1996 she joined the Faculty of Education at the University of Prince Edward Island and became vice-president, academic development, in 2001, a position she held until becoming president and vice-chancellor at the University of Regina.

Dr. Timmons has been recognized with numerous awards throughout her career. These honours are listed below.

• Received the 2019 Indspire Award for Education;
• Named a recipient of the 2019 YWCA Women of Distinction Lifetime Achievement Award;
• Named an officer of the Order of Canada in 2017;
• Named the 2016 Citizen of the Year by CTV Regina;
• Received the 2016 Leadership Award from District VIII of the Council for Advancement and Support of Education;
• Received the inaugural Gender and Leadership in Higher Education Award from the Inter-American Space for Women Leaders in Higher Education Institutions of the Americas in 2015;
• Received the 2014 Senior Women Academic Administrators of Canada Recognition Award for leadership in promoting and supporting diversity within Canadian academic institutions;
• Recognized with the 2013 Red Cross Humanitarian Award;
• Received the 2012 Canadian Association for Education Psychology’s Carol Crealock Award in recognition of her life’s work in the field;
• Received the 2009 Canada Post Literacy Award and the 2010 Canadian Association for Community Living’s National Inclusive Education Award;
• Named one of Canada’s “Top 100 Most Powerful Women” in 2008, 2009, 2010 and 2011; and
• Named one of the 10 most influential women in Saskatchewan in 2009.

Dr. Timmons and her husband, Stuart Mason, have four children and three grandchildren.

About the Presidential Search Process

More information about the Presidential Search and Memorial University can be found online.