The 11th annual School of Pharmacy White Coat Ceremony on Jan. 12 continued a new tradition, but paid tribute to a career that spanned decades.

The honorary white coat underscores the fact that the practice of pharmacy would not be where it is today without the trailblazers who came before. Recipients of the honorary white coat are leaders, mentors and inspirations to future generations of pharmacists. They exhibit the qualities and dedication to the profession that the school wishes to instill in students.

Last year, the first recipient of the coat was newly minted Premier Dwight Ball, in acknowledgement of his success as a leader in the field of pharmacy.

“To move towards a strong future, we have to recognize the strengths and accomplishments of the past.” — Premier Ball

The tradition dictates that the previous year’s recipient returns to the ceremony the following year to present the white coat to the next honoree; Premier Ball therefore presented the coat to the 2017 recipient, Don Rowe.

“To move towards a strong future, we have to recognize the strengths and accomplishments of the past, and there is no one more deserving of this honour,” said Mr. Ball.

Don Rowe is a longtime friend and advisor of the School of Pharmacy. He has been an integral part of admissions interviews, the Structured Practice Experience Program, a trusted committee member and colleague, and a mentor to many students.

After transitioning from teaching math and chemistry at the high school level to join the pharmacy program at the College of Trades and Technology (now the College of the North Atlantic), he graduated as a pharmacist in 1976.

He practised throughout Newfoundland and Labrador as both a community and hospital pharmacist for 20 years. He has been involved in pharmacy affairs on a national level through committee work with the Canadian Pharmacists Association and the Canadian Foundation for Pharmacy, as well as the Council of Pharmacy Registrars of Canada and the National Association of Pharmacy Regulators. He served as secretary-registrar of the Newfoundland and Labrador Pharmacy Board from 1994 until his retirement in 2012. He is still passionate about keeping the history of pharmacy alive. He is a trustee of Apothecary Hall Trust and is a member of the Canadian Academy of the History of Pharmacy.

With his characteristic warmth, wit and collegiality, Mr. Rowe said he was both flattered and humbled during his acceptance speech.

“About 20 years ago, I provocatively said to the graduating pharmacy class that, ‘Pharmacy, as you know it, is dead.’ Even I didn’t realize at that time how true that statement was. But as the TV infomercial says, ‘Wait, there’s more!’ Even more change is coming to our profession. Change that will challenge this generation of pharmacists and change that will inspire you, the next generation.”

“My generation has had its kick at the can.” — Don Rowe

To the students, he indicated that the time has come to move on to new approaches to old issues.

“My generation has had its kick at the can and it’s time for you to step up to the challenge with fresh ideas and fresh enthusiasm.”

Mr. Rowe concluded with a quote from poet Robinson Jeffers: “Lend me the stone strength of the past and I will lend you the wings of the future, for I have them.” 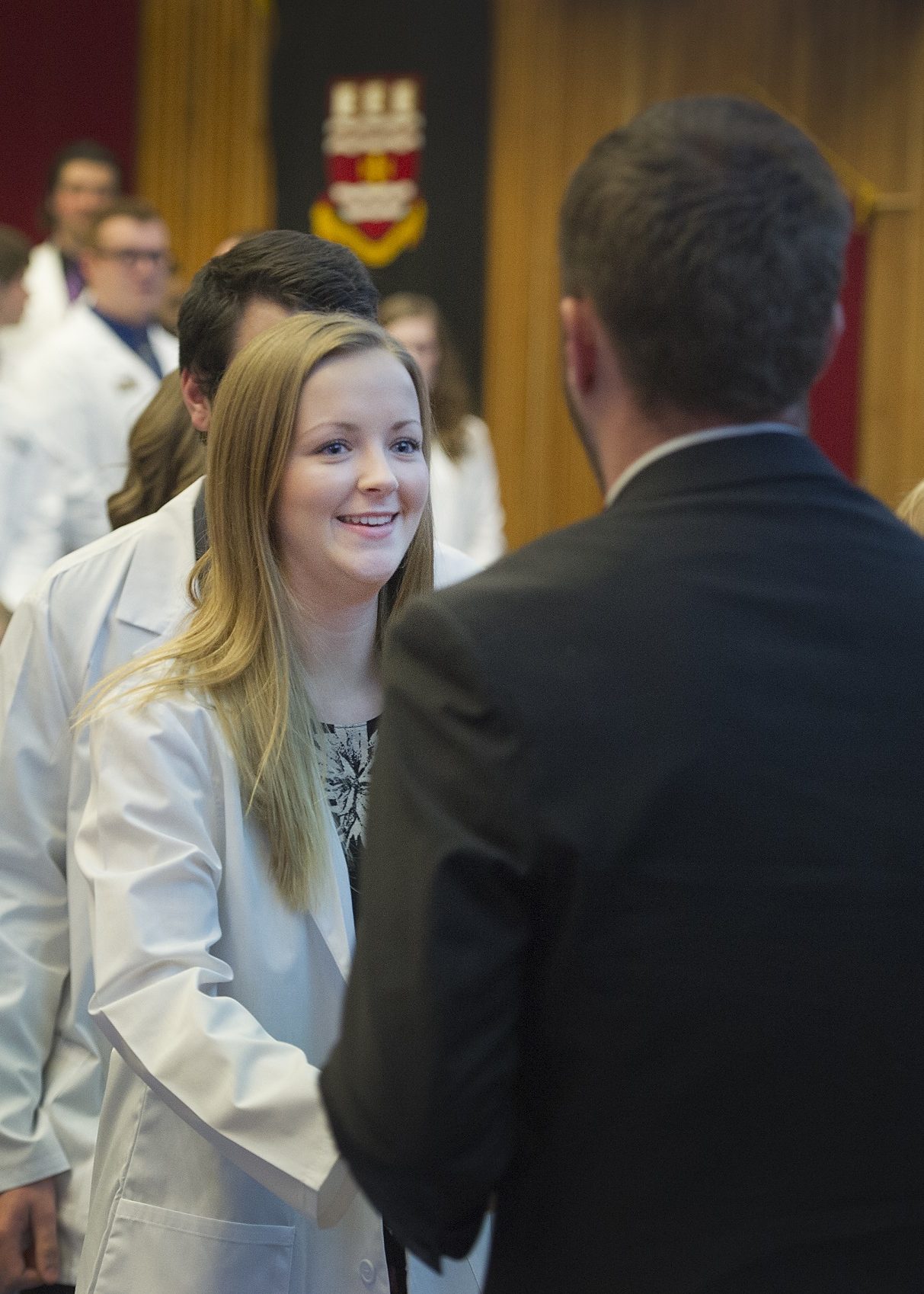 A first-year student is officially accepted into the pharmacy profession.