A group of graduate students recently discovered traditional skills associated with the province’s cod fishery, thanks to an excursion led by the Centre for Social Enterprise.

Last month, about 19 residents of the Battery Facility as well as facilitators from the centre and Student Life visited a non-profit social enterprise in Petty Harbour called Fishing for Success. Led by Kimberly Orren and Leo Hearn, Fishing for Success helps celebrate traditional culture by teaching youth and families the fishing heritage of Newfoundland and Labrador.

The aim of the outing was to give students an appreciation of community engagement and of the impact that social enterprises can have on preserving heritage and traditions. The centre offers many such engagement activities as a means of fostering creativity and nurturing students to become leaders for social change.

The participating students were part of Memorial’s Living Learning Community, a two-year residential project that aims to engage graduate students living at the Battery Facility in co-curricular activities focused on public engagement. 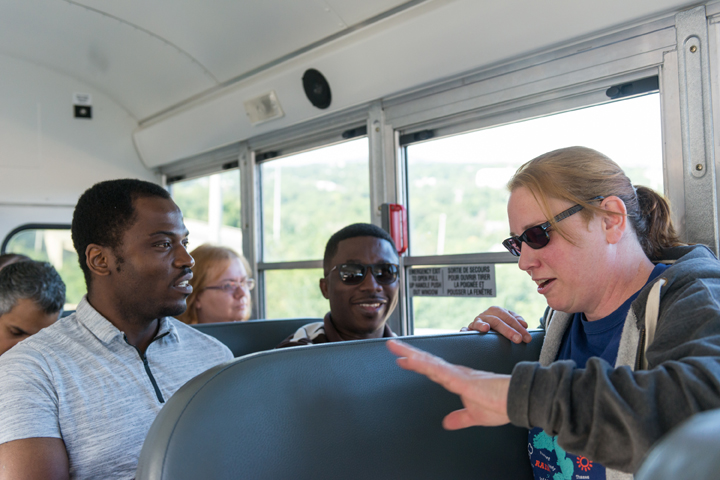 Dr. Shannon Lewis-Simpson, co-ordinator of community engaged learning at Student Life and an adjunct professor in the Department of Archaeology, chats with participants aboard the bus during the drive to Petty Harbour. The Living Learning Community aims to foster engagement and leadership among graduate students living at the Battery Facility. 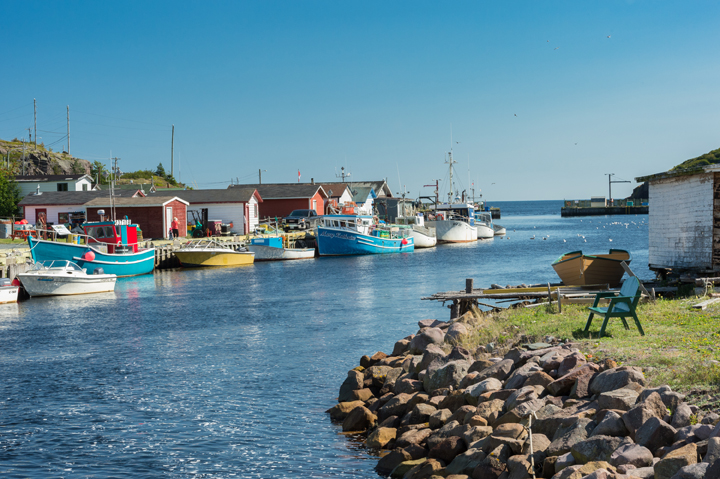 Petty Harbour-Maddox Cove is a unique community in that families in the area have maintained a Protected Fishing Area since 1895. People in the community only fish with hook and line and don’t use gill nets, bull tows or trawlers. The protected area also includes Motion Bay. 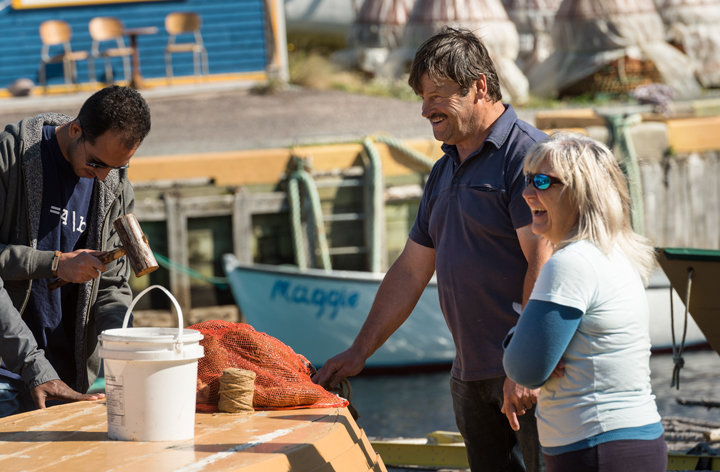 Ms. Orren, right, co-founder of Fishing for Success, says children in the province used to be involved in the traditional fishery. Kids would venture down to the wharf, cut out cod tongues and do other tasks as directed by the fishermen. “It allowed us to feel part of a community and have meaningful work,” she said. “The people who were teaching these things weren’t related to me but they taught me anyway. That made a big impact on me as a kid.” 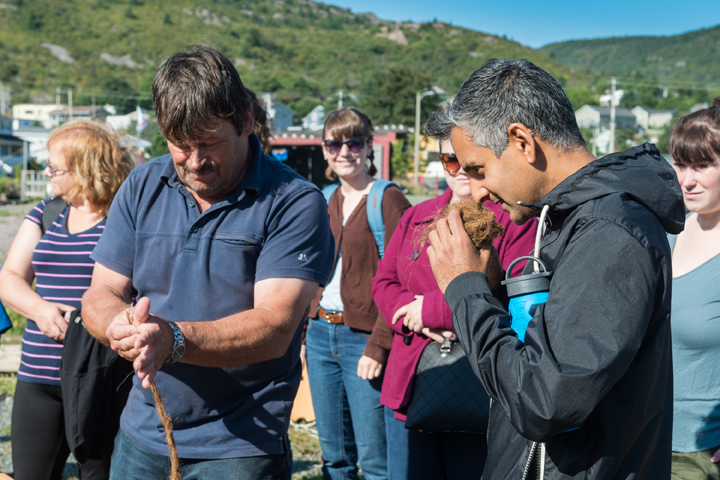 Mr. Hearn demonstrates how hemp fibre, or oakum, was formed into rope by rolling the fibre briskly between the hands. Richard Kissoon of Trinidad, a PhD student in kinesiology (right), smells the hemp, which is treated with pine tar for waterproofing. 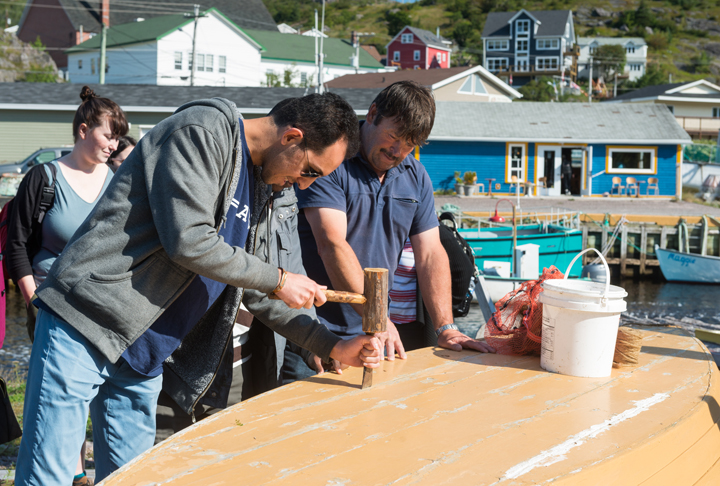 Mohammad Moharrami, a PhD student in civil engineering from Iran, tries tapping oakum into the seams between planks on a traditional dory. “Back home we have this kind of stuff – fishing – in the north part of the country but I’ve never had the opportunity to do it,” he said. “This is something that must be kept alive. If the younger generation are not learning how to do these things, then 100 years from now, no one will know how to fish.” 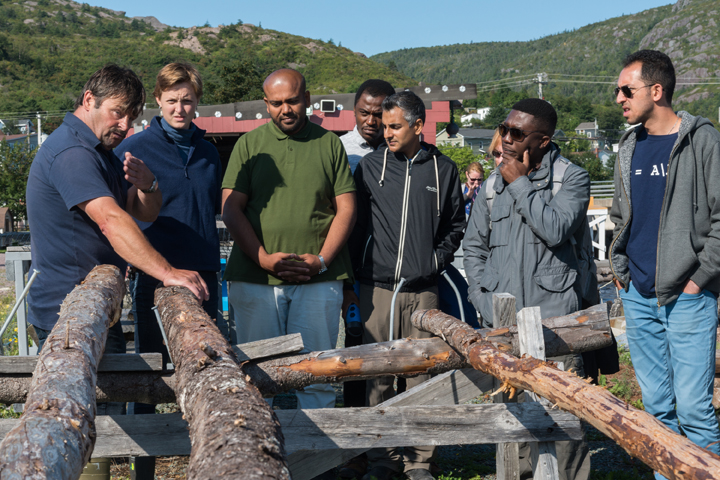 Mr. Hearn, left, tells students about rinding, or removing the bark from, tree trunks that were then used to build wharves and stages. In Petty Harbour, black spruce was typically used. 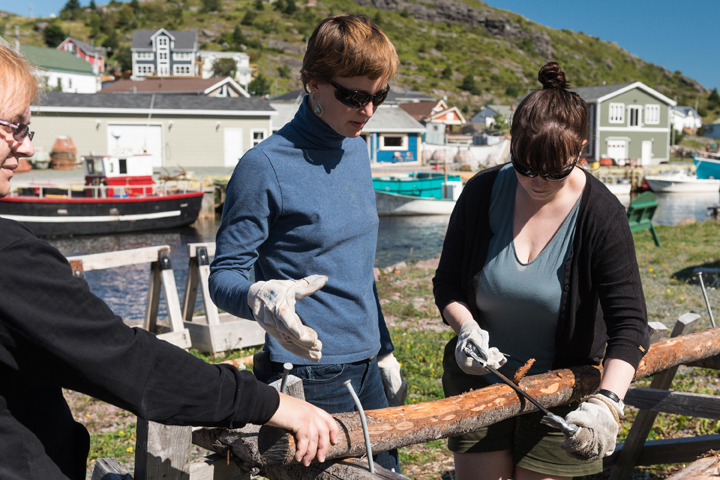 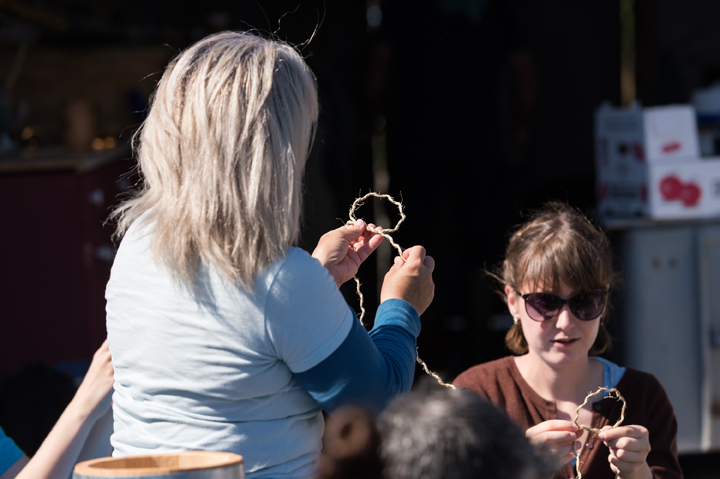 Ms. Orren demonstrates how to weave hemp rope into a withe, which is used to hold an oar to the gunwale of a dory, while Olivia Robinson, a graduate student in creative writing from Nova Scotia, tries to master the skill. “This is a great way to preserve the way of life in Petty Harbour,” said Ms. Robinson. 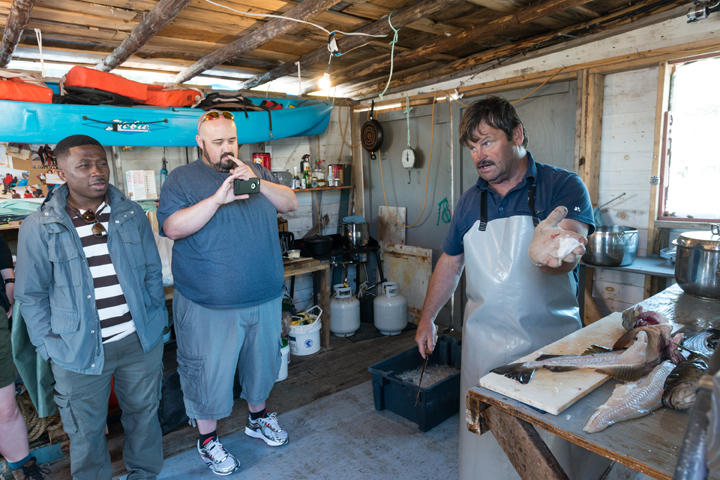 As Mr. Hearn demonstrates filleting a cod fish, Simon Adu-Boeteng of Ghana, far left, is reminded of his home country where they use all parts of the fish. Mr. Adu-Boeteng, who is studying for a master’s of education degree, said he was surprised at how much of the fish is discarded. 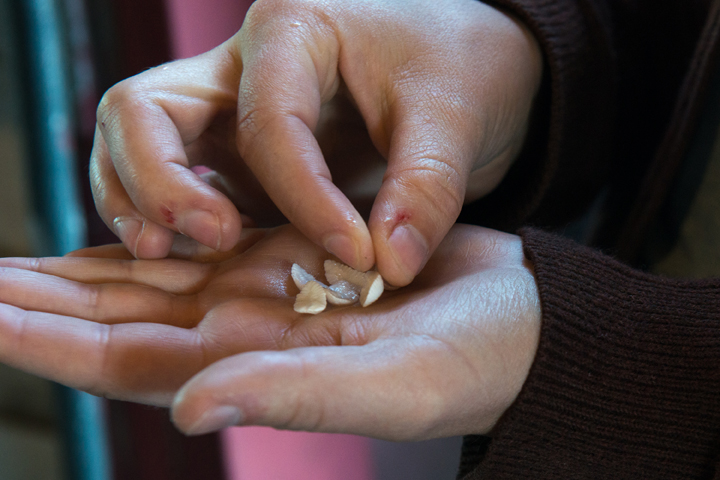 For Ms. Robinson, the outing to Petty Harbour with the Centre for Social Enterprise and the Battery Facility’s Living Learning Community allowed her to see fish ears, or otoliths, for the first time. “They’re like shells,” she said, before taking these home. 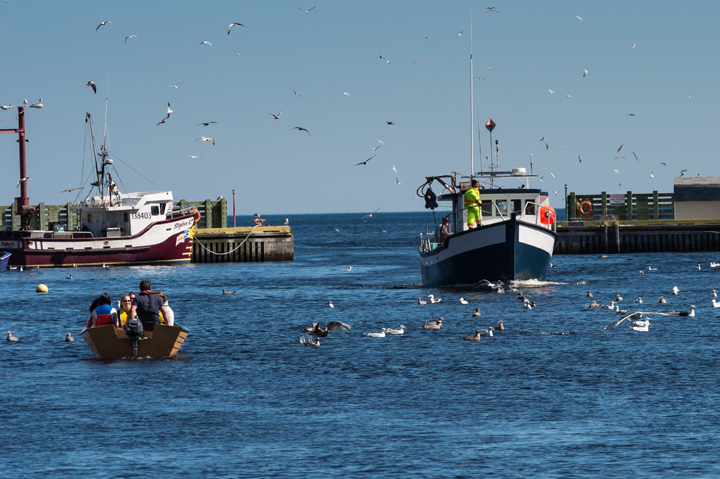 Mr. Hearn takes a group of students around the harbour in a traditional flat, or Grand Bank, dory. The Banks dory were used as traditional fishing boats in the mid-1800s and were often stored on the decks of larger ships where they were used for catching cod with hand-lines. The design of the Grand Banks dory was refined and popularized by Stephen Grandy on the south cost of the island, where his family ran a workshop building and selling his version of the boat.

Susan White is a communications advisor with the Faculty of Business Administration. She can be reached at susanwhite@mun.ca.