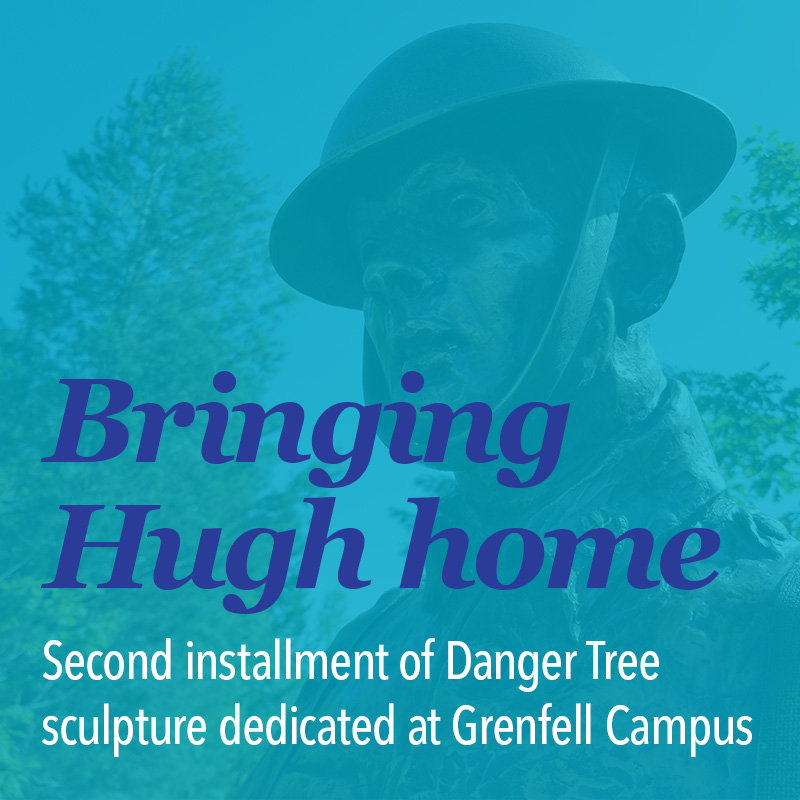 The second and final element of The Danger Tree sculpture has been unveiled at Grenfell Campus.

The bronze sculpture is now complete with the addition of a sculpture of Pte. Hugh Walter McWhirter, the first solider from the First Battalion of the Royal Newfoundland Regiment killed in combat in the First World War.

The first piece of the sculpture, The Danger Tree, was installed in June 2016. Both pieces were gifted to the university through the Forget Me Not Committee.

The group is comprised of dedicated volunteers who are committed to preserving the memories of those lost at war through the installation of art pieces in the City of Corner Brook.

The actual Danger Tree, as it became known following the Battle of Beaumont-Hamel, was a solitary tree approximately halfway between the British and German front lines in the French countryside during the First World War.

Many Newfoundland soldiers converged on the location attempting to advance; it was there that many of them fell.

“The Danger Tree installation reminds visitors of the heroic conduct of the Newfoundland Regiment who, on the first day of the bloody Somme offensive, in a mere half hour, was shattered as its members moved towards a marker – the remnant of a tree in no man’s land – around which scores died in a battle where, out of a force of nearly 800, only 68 answered the roll call when the calamity mercifully concluded,” said Jeff Keshen, vice-president, Grenfell Campus.

“There is no more fitting place for this statue than Memorial University, a living Memorial to all those who were lost in the First World War and later rededicated to those lost in the Second World War,” said Gudie Hutchings, member of Parliament, Long Range Mountains. “And it’s very fitting that this would take place during Corner Brook Come Home Year celebrations. We are bringing Hugh home.”

The project was spearheaded by Dave Higdon, chairperson of the Forget Me Not Committee, who, along with his fellow committee members, worked tirelessly to secure funds for the establishment of war memorials in key locations in the region, including Grenfell Campus and Remembrance Square in Corner Brook.

Also unveiled, to complete this site and to provide future generations with a deeper appreciation of the tremendous scope of the contributions made by Newfoundlanders and Labradorians, was a bench commemorating the 500 volunteers who formed the Newfoundland Forestry Corps. The corps cleared more than 1,200 acres of timberland, a supply that was critical to the Allied war effort.

To add to the significance of the event, performances were given by award-winning folk and traditional musical trio The Ennis Sisters and local bagpiper Elaine Huxter.

Visual artist and bronze sculptor Morgan MacDonald created the memorial. Mr. MacDonald is a Corner Brook native and alumnus of Memorial University. In 2016, he received the Alumni Horizon Award for exceptional achievement by a Memorial graduate under the age of 35.  The Danger Tree element of the memorial was profiled in 2016 in the Gazette.