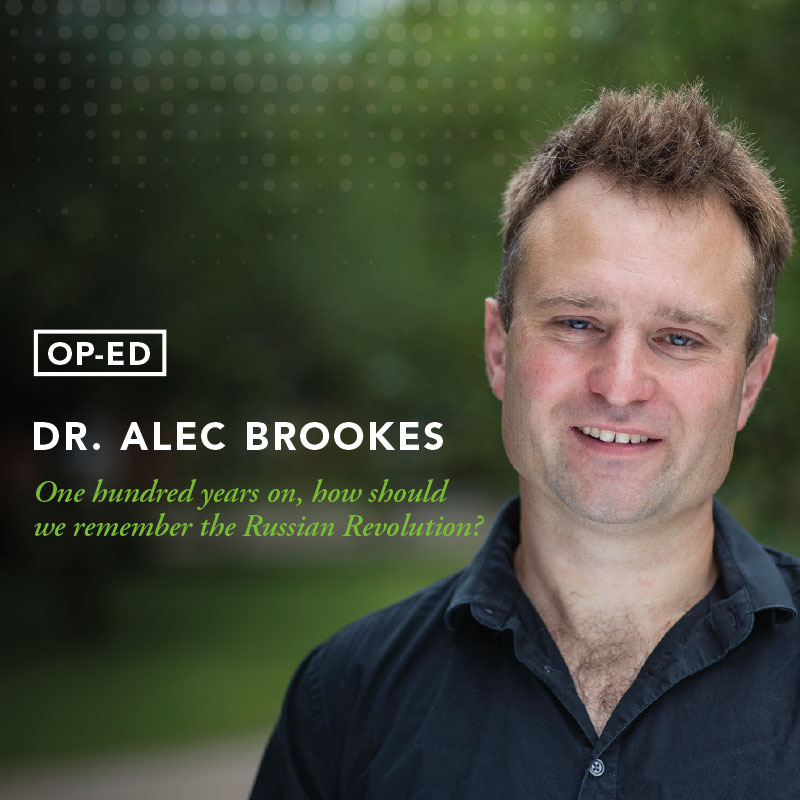 One hundred years on, how should we remember the Russian Revolution?

Both Canada and Russia are marking anniversaries this year, and the question of how they should be marked — whether they should be celebrated or mourned — has been a central part of the public discourse in 2017.

In his recent popular retelling, fantasy fiction author China Miéville described the revolution as an event that proved “far-reaching, contested, ultimately tragic and ultimately inspiring,” and opinions on how we should commemorate it have been predictably contested between those that hold on to its inspirational capacity, those who warn against the perils of revolution or those who even mourn the end of a world of tsars, tsarinas, and Fabergé eggs.

Russian President Vladimir Putin, trying to keep the Russian people united, has simply tried his best to ignore it, telling his advisors it would be unnecessary to commemorate the centennial.

Over the winter semester, I taught a course at Memorial on contemporary Russian film on the occasion of another anniversary—the 25th anniversary of the fall of the Soviet Union.

We reflected on various attempts in post-Soviet film to recuperate Russian history, for better or worse, despite the historical rupture of a revolution and a 75-year period when Russia was then known as the Union of Soviet Socialist Republics.

That anniversary, too, was fraught. It seemed as though we were marking less the liberation from the Soviet project and more its failure.

“This anniversary, like the others, was an exercise in making sense of permanence and rupture in national and world histories.”

The experience of conducting a course on this material was an illuminating exploration into the decay of an economic system that seemed inescapable until it was no more, and how cultural memory through film and other media attempted to reassert continuity. In many ways this anniversary, like the others, was an exercise in making sense of permanence and rupture in national and world histories.

Which brings us back to the centennial of the Russian Revolution: how should we remember it, if at all?

The move to discount it, or else to focus entirely on the violence of revolution or the extraordinary violence of the subsequent Stalin years, I believe is based on what Mark Fisher called “capitalist realism”: the pervasive atmosphere that compels us to believe there can be no reality outside of capitalism.

In a speech delivered in 2014, Ursula Le Guin insisted, though, on the possibility of imagining a world outside the boundaries of capitalist realism: “We live in capitalism. Its power seems inescapable. So did the divine right of kings. Any human power can be resisted and changed by human beings.”

Her powerful message appears even more urgent now, when elections in the U.S. and France have offered the cynical choice between a jobless future and the purging of the human population through escalating wars combined with anti-immigration violence.

Closer to home, we face the impending dual crisis — economic and environmental — associated with Muskrat Falls.

How are we to imagine a world outside of these crises that seem so inevitable? Le Guin continued with a message of hope: “resistance and change often begin in art,” she claimed, “and very often in the art of words.”

It seems to me that the point of marking the centennial of the Russian Revolution is neither to praise nor condemn it but to remind ourselves that there are realities of capitalism, realities that — beginning with the art of words — can begin to take shape so that we might work to make meaningful, positive changes in our everyday lives.

“We will read novels that set their readers’ imaginations to the task of manifesting a new reality outside of the seemingly inescapable social and economic structures of their time.”

This fall, to mark the anniversary of the revolution, I will be offering a new course on the Russian Utopian Imagination.

We will read novels that set their readers’ imaginations to the task of manifesting a new reality outside of the seemingly inescapable social and economic structures of their time.

The course will culminate with a reflection on the status Utopia now, 100 years on from revolution, and how it arises in the Vision for Black Lives, the crudely anti-Utopian Dark Mountain Manifesto, and the 150 Acts of Reconciliation, and how even now Utopia has the capacity to imagine realities outside a present that seems like it will last forever.

Dr. Alec Brookes is a professor in the Department of Modern Languages, Literatures and Cultures, Faculty of Humanities and Social Sciences. He can be reached at abrookes@mun.ca.