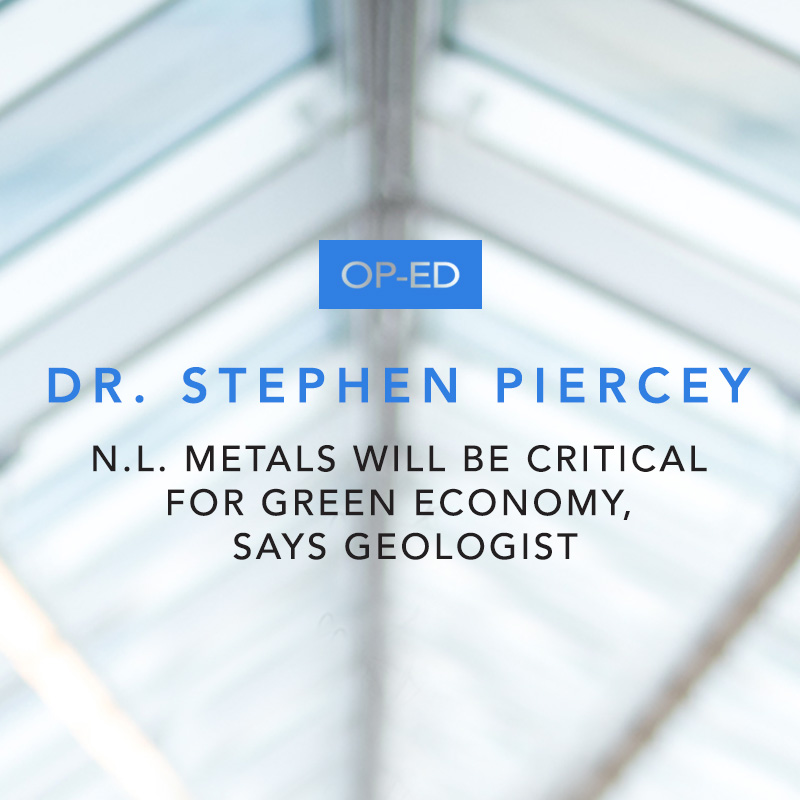 N.L. metals will be critical for green economy, says geologist

The recent climate marches mobilized millions of people globally to raise awareness of climate change signaling to governments that current policies on greenhouse gas emissions are not sufficiently addressing the challenge of climate change.

Many governments and the general public recognize that new, or revised, policies must be implemented that will spur a transition from the existing petroleum economy to a renewable “green” economy.

The transition to a green economy will require an increasing reliance on existing, evolving and new technologies that will allow us to maintain our standard of living but doing so with a smaller carbon footprint.

This shift, however, will not decrease our reliance on metal resources. In fact, many of the products required for the green transition will put greater strain on both the traditional and the “high technology” metals required to transform our global infrastructure.

“The World Bank estimates that wind turbines, solar panels and energy storage alone will require at least 300 per cent, 200 per cent and 1,000 per cent more metal, respectively.”

This green shift will see an increasing reliance on electric and hybrid vehicles, which require significantly more metals than existing combustion vehicles.

For example, “green” vehicles require 2-4 times more copper than conventional combustion engines, and this doesn’t include the copper that will be needed for the charging infrastructure.

Likewise, the shift from coal-, natural gas- and diesel-based electricity generation towards renewable energy sources, like solar panels and photovoltaics, and windmills/windfarms, will require both traditional metals, such as nickel, chrome, iron, copper, tin, silicon, and uranium, and “high tech” metals, like the rare earth elements (e.g., neodymium, dysprosium, scandium), cobalt and lithium.

The World Bank estimates that wind turbines, solar panels and energy storage alone will require at least 300 per cent, 200 per cent and 1,000 per cent more metals, respectively, than we are currently using.

Similarly, the robust computing and communications infrastructure needed to drive our “smart homes” and “smart cities,” including the sensors, wiring, light bulbs, heat pumps and computers will all require additional metals.

Additionally, the ubiquitous smartphones, tablets and laptops that we use daily and helped mobilized millions for the climate strikes (and were subsequently utilized for the millions of tweets, selfies, blog posts and emails after the event!) contain approximately 30 elements within them, including copper, gold, silver, zinc, rare earth elements, indium and lead.

Demand for these portable electronics will not decrease in a green economy, nor will the demand for the metals they contain.

While recycling can supply some of the elements needed for the green transition (e.g., copper, iron), the increased demands for other elements require society to increase production or find new resources.

At present, many of the high-tech elements have very restricted supply and availability worldwide.

“Canada is in a potentially precarious position given the political instability and geopolitics of many of these supplier countries.”

Canada is in a potentially precarious position given the political instability and geopolitics of many of these supplier countries above.

Thus, it is possible that there could be supply disruptions and reserve uncertainty for these critical metals, which in turn could decelerate the development of green energy infrastructure and the technological developments needed for a new economy.

In Newfoundland and Labrador, we have world-class mineral resources like the nickel-copper-cobalt deposits at Voisey’s Bay and the iron ore deposits in Western Labrador, as well as other metals needed for the green economy (e.g., rare earth elements in Strange Lake and Port Hope Simpson).

“Just as I prefer my food from local sources whenever possible, I also advocate for local metals.”

Mining contributes millions in annual royalties to the province (approximately $90 million in 2016), employs about 4,800 people directly and there are billions in mineral shipments annually (since 2009 $2.2-$4.4 billion annually).

The royalties, income taxes and countless spin-off industries from this industry directly contribute to our provincial (and national) economy, particularly so in rural Newfoundland and Labrador.

In an emerging green economy, Newfoundlanders and Labradorians (and all Canadians) must decide whether we wish to obtain our resources domestically or be reliant on imports from significantly less reliable foreign sources.

We have government regulatory regimes that provide environmental oversight and monitoring; royalty and taxation regimes that ensure that generated wealth contributes to the social programs that we all value; and a talented workforce that are contributors to the minerals industry in Canada and internationally.

This situation contrasts greatly with many foreign jurisdictions that will source the needed metal for the green economy should we decide not to mine the assets in our own back yards.

Just as I prefer my food from local sources whenever possible, I also advocate for local metals.

I believe Newfoundlanders and Labradorians have an opportunity to contribute greatly to the coming green economy and do so in a technically, environmentally, socially, and fiscally responsible manner.

Dr. Stephen Piercey is a professor in the Department of Earth Sciences, Faculty of Science, at Memorial. He can be reached at spiercey@mun.ca.