A Q&A with alumnus and human rights advocate Carl Mercer

Carl Mercer, BA’05, may have grown up in a small town, but his ambition and interest in human rights issues have taken him around the world.

Mr. Mercer came to Memorial with his sights set on becoming a lawyer, but one course in the Department of Political Science changed the trajectory of his career. Now living in New York City, he works with the United Nations supporting communications in the areas of climate change and disaster risk reduction. His career has taken him to France, Japan and Morocco, just to name a few places, but he still makes the time to come home to Newfoundland and Labrador twice a year.

LP: Tell me a little about yourself. Where are you from? How did you first decide to come to Memorial as a student?

CM: I’m originally from Butlerville, a small town in Bay Roberts. Like most high school students in Newfoundland and Labrador, I opted to stay close to home, attending Memorial both for the proximity to my family and for the relatively low cost when compared to other schools in Canada. Of course, being from a small town, moving to St. John’s was, and is, quite a big deal when you’re 18.

While at Memorial I completed a bachelor of arts in political science with a minor in English. My original plan at the time was to use this as a stepping stone to law school; however, my ambitions and interests changed over time. In particular, I did a course in the Department of Political Science called The Politics of Food, which got me interested in the global political and economic decisions and actions that affect food security. It was after this that I began to look at international development as a career path.

I would say that the first step on that path was participating in a Canada-South Africa exchange program with Canada World Youth. I did this when I was 21 on a break between my third and fourth year at Memorial. This really cemented my desire to work in this field. I returned to Memorial to finish my last year, then immediately went to Ethiopia, again with the government, as part of the Coady internship program. I ended up spending a year in Ethiopia working on a food security project before accepting my first real employment in Indonesia, following the Indian Ocean tsunami of 2004.

After two years in Indonesia I spent six months working with refugees in Chad. Around this time I realized I needed to undertake graduate studies if I was going to continue my career growth, so I completed a master of arts in international relations, focused on conflict and human rights at Utrecht University in The Netherlands.

LP: When did you move to New York City? Why did you decide to move there?

CM: While completing my master of arts, I decided that I wanted to work with the United Nations and began pursuing opportunities that would take me in that direction. I moved to New York in January 2010, to work with an NGO, but continued to pursue my goal of working with the UN, which is headquartered in New York City. I began working with the United Nations Development Program (UNDP) in January 2013.

LP: Tell me more about your position with the United Nations. What are some interesting things you have done in this role?

CM: My role is to support communications, advocacy and partnerships in the area of climate change and disaster risk reduction. This includes things such as writing speeches for senior management, holding press events, sharing results from UNDP’s work — we have offices in nearly 170 countries globally — creating videos, working on social media and hosting events with partner agencies.

There have been quite a few really interesting experiences, though I would say supporting the global deals of 2015 stands as a high point. Last year, the international community finalized four major global agreements: the Sustainable Development Goals, the Sendai Framework on Disaster Risk Reduction, the Addis Ababa Action Agenda, and of course the Paris Agreement on climate change.

I would have to say that being in Paris for the adoption of the Paris Agreement stands out as a personal career highlight. We had spent months advocating and calling for a global climate deal, and pushing hard on communications — and we were only one of many agencies and many governments doing the same thing — so it was very satisfying to see it come together. More world leaders came together in Paris than had ever been together before in order to secure the Paris Agreement, and the feeling throughout the two-week conference was one of history being made. It was quite emotional for everyone the day that they struck the gavel and finalized the deal, and I feel grateful to have played a tiny part in that process.

LP: How has your time at Memorial University influenced your career?

CM: I’m still close friends with most of the people I went to school with at Memorial and see them twice a year when I go home. I feel that this extra layer of social support is one of the greatest things we can take away from those years. While we’ve all gone our own paths, getting married, having families, we can still come together and have a great time and know that we have people to rely on. In fact I had dinner with a group of friends in August, and we joked that it was an unofficial reunion.

On the academic side, I struggled my first two years at Memorial, mostly due to the fact that I didn’t know what I wanted to do. However, once I realized my career path and began the process of following it, I found the professors and departments at Memorial to be incredibly helpful. Dr. David Close in the Department of Political Science and Dr. Stella Algoo-Baksh in the Department of English, particularly, stand out as professors who helped offer guidance and support and whose classes I particularly enjoyed.

LP: What else are you working on right now?

CM: I’m actually in Marrakech, Morocco, right now for the next few weeks attending COP22, the followup to the Paris conference. The tagline for this year’s conference is, fittingly, Action Time, as the international community is now tasked with turning the Paris Agreement — with all of its goals and targets — into concrete action that will deliver results and keep global temperatures in check. It’s going to be an arduous and long-term task, but the momentum by which the world has pushed forward on the Paris Agreement — adopting it, signing it and entering it into force within less than a year — gives me hope that this is something we will be able to achieve.

Meet interesting alumni like Carl Mercer at one of our social events in an area near you! For a schedule of events, please visit here.

Lisa Pendergast is a communications advisor with Alumni Affairs and Development. She can be reached at lpendergast@mun.ca. 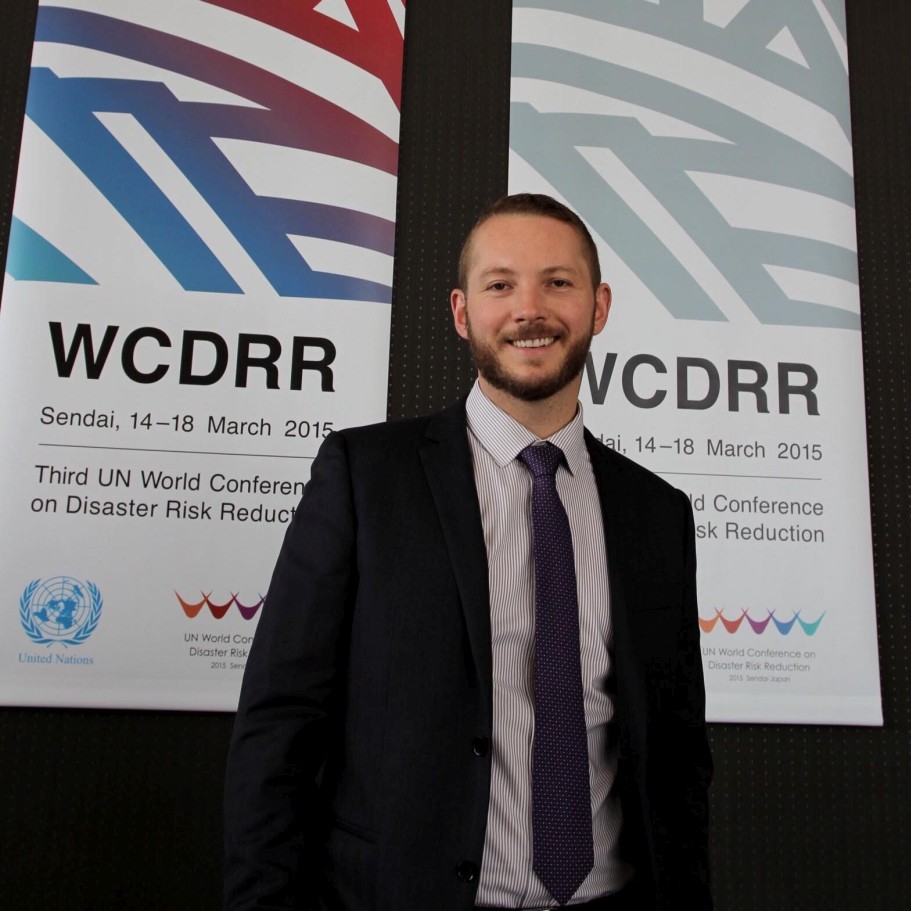 Carl Mercer at the World Conference on Disaster Risk Reduction, in Sendai, Japan, in 2015.