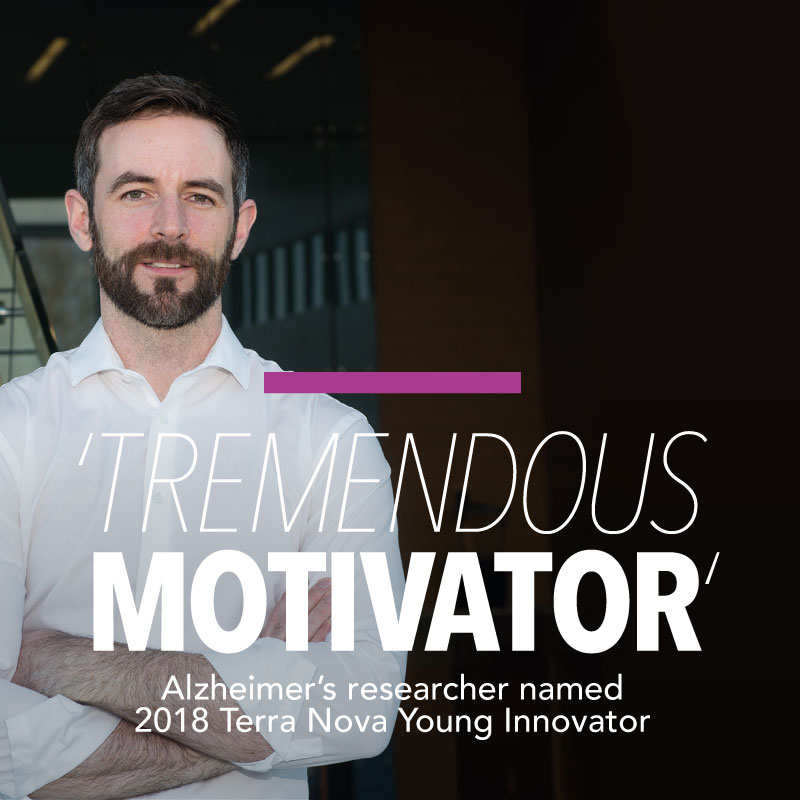 A lucrative faculty award is empowering a Memorial researcher to better understand — and potentially find a cure — for the world’s most common neurodegenerative disease.

Dr. Matthew Parsons is this year’s recipient of the Terra Nova Young Innovator Award (TNYIA), which recognizes and supports outstanding young faculty members whose research is particularly innovative and whose specific proposal has real potential to make a significant impact on society.

The award is supported through $50,000 in funding from Suncor Energy, on behalf of the partners in the Terra Nova oil field.

Dr. Parsons is an emerging researcher in the Faculty of Medicine where he is assistant professor of biomedical sciences (neurosciences). He is leading a pioneering research study aimed at understanding how a healthy brain works and what goes wrong in neurodegenerative diseases such as Alzheimer’s disease, which affects one in nine people over the age of 65. Currently, there is no known cure for the disease.

“We want to understand precisely what happens to brain cells in the very early stages of Alzheimer’s disease, before the cells begin to die,” said Dr. Parsons. “We hope that our work will identify novel targets for drugs treatments that will bring us closer to successfully delaying, or even preventing, the symptoms associated with this devastating disease.

“This award is a tremendous motivator for us to continue to work hard every day to help better understand neurodegenerative disease.”

“On behalf of the Terra Nova partners, we are proud to be a part of the TNYIA that will support Dr. Parsons’ important work,” said Brent Miller, asset manager, Terra Nova. “We believe Dr. Parsons’ research has the potential to not only lead to positive change in our own community but improve the social well-being of many who are impacted by Alzheimer’s disease.”

Dr. Parsons was selected after a rigorous review process and a tremendous response to a call for applications. He is only the second researcher from the Faculty of Medicine to receive the award; Dr. Mani Larijani received the honour in 2012.

“Dr. Parsons’ research will strengthen Memorial’s global reputation for innovative research while having the potential to make a real impact on those living with neurodegenerative diseases. I thank Suncor Energy for its continued commitment to supporting world-class research at Memorial, and wish Dr. Parsons much success in his scientific studies.”

The brain is the body’s most complex organ. It is estimated to contain 100 billion neurons that form 100 trillion connections with each other.

Adding to this complexity is the fact that at least an equal number of non-neuronal cells, known as glial cells, also exist in the brain and that these glial cells play important roles in healthy brain function.

“This new equipment will allow me to train more students to become experts in advance imaging techniques in the neurosciences.” — Dr. Matthew Parsons

Dr. Parsons and his team have recently characterized a technique that can distinguish the source of toxic chemical release in the brain and intend to study how it is regulated in the healthy brain and how it is altered in the context of Alzheimer’s disease.

He says the Terra Nova Young Innovator Award is critical for this research.

“Research funding is very competitive, so it’s essential to get off to a fast start within the first few years of an academic appointment,” said Dr. Parsons.

“Research in my lab relies heavily on microscopy, which can be quite expensive. Part of the Terra Nova Young Innovator Award will be used towards setting up new infrastructure in my lab. This new equipment will allow me to train more students to become experts in advance imaging techniques in the neurosciences, and will help us to conduct fundamental research with high relevance to Alzheimer’s disease.”

Dr. Parsons holds a B.Sc.’04, M.Sc.’06, PhD’11 from Memorial. He was a post-doctoral fellow at the University of British Columbia from 2011 to 2015 before returning to Newfoundland and Labrador to assume his faculty position in the Faculty of Medicine.