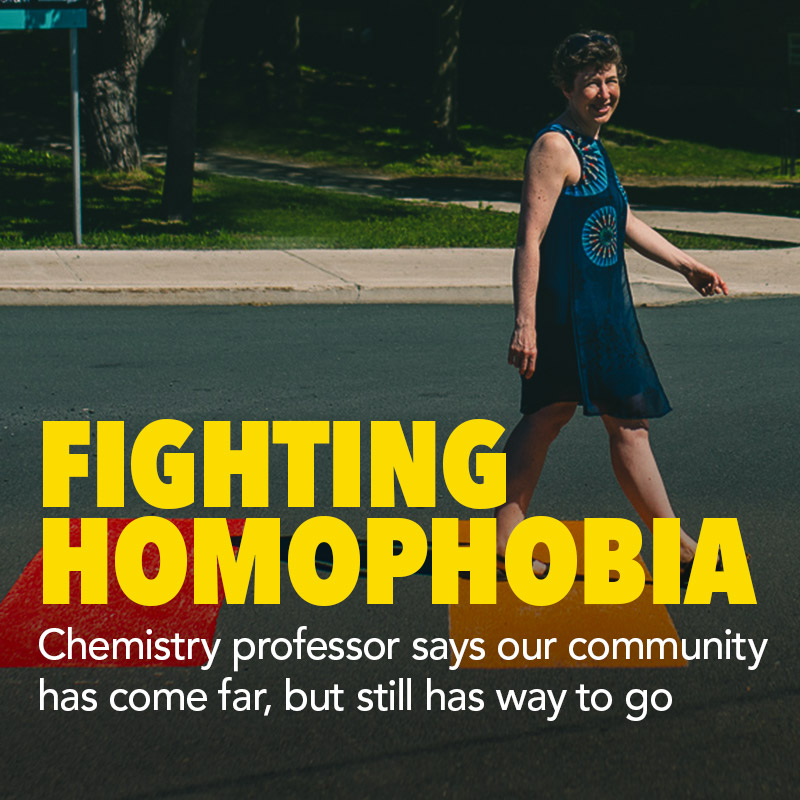 Chemistry professor says our community has come far, but still has way to go

As the Memorial community celebrates Pride, the Gazette spoke with Dr. Erika Merschrod for some perspective on being out professionally and personally, how being out is a uniquely specific experience for each person, the impact of youth on the cultural shift towards greater inclusion of all sexual identities and singing in a queer choir at the rainbow flag-raising on Confederation Hill on Friday, July 12, at 12 p.m. (you’re invited!).

MC: I’d like to hear what it’s been like for you personally working in the university environment, at Memorial specifically.

EM: I have been fortunate to be able to be “out” from day one at Memorial, partly from necessity – my then-wife and I were both applying for jobs at Memorial – and partly from choice. I find it awkward to come out in a professional context, so it’s much easier if people already know from the start!

There are certainly people I have worked with at Memorial who are homophobic, just as there are those who don’t know how to deal with a female colleague or an outspoken woman. Speaking truth to power does not make me very popular in some circles.

I am lucky to be in a position, particularly now, where I can avoid or ignore most of those people! It was certainly more challenging at first, however, and I certainly wouldn’t have spoken so frankly about these challenges earlier on, before I had earned tenure and was promoted to the rank of professor.

MC: What have your experiences been like working elsewhere?

EM: My previous positions as a post-doctoral fellow or research associate were not as visible, so it’s hard to compare to my situation now. Certainly I think it’s easier to be out in a city like Toronto, or a liberal college town like Ithaca, N.Y., – my two previous locations.

‘I’m in a privileged position, I look like a straight, white woman, so I “pass.”’

I have found St. John’s very welcoming, but that is partly a reflection of my privileged position within society, and also my lack of “baggage” with local institutions or family networks.

I don’t know if I’m being clear: I have found St. John’s an easy place to be out, but I know that others have had very different experiences with growing up, living, or working in St. John’s.

MC: How have things changed during your working career in terms of being an “out” face at Memorial?

EM: Having tenure helps a lot! In addition, the world has changed so much in the past 20 years and certainly since I came out nearly 30 years ago.

Memorial’s employment equity statement is much more inclusive, and more of the formal documentation has options such as “other” genders. I identify as female, but it makes me feel more comfortable and welcome as a queer person when I see those broader gender categories.

I’ve also seen a big change among the undergraduate students, who seem much more open-minded now than when I first arrived here at Memorial. I have learned a lot from young people about how to use more inclusive vocabulary.

For example, at a teaching conference I attended earlier this spring I learned about putting my pronouns (she/her) in my email signature, as a way to signal to others that I am aware that people might use different pronouns than one would expect.

As an added bonus, my new email signature has created some teachable moments with friends and colleagues.

MC: How important is keeping 2SLGBTQIA+ rights at the forefront of society and academia?

EM: There has been so much progress over my lifetime. Not that long ago I couldn’t have even imagined having a term like 2SLGBTQIA+, much less using it in a conversation in the workplace!

This interview is not something I would have thought possible when I was in school or when I started here at MUN.

‘It is surprisingly easy to start believing that things are fine just because I am not in danger of losing my job, much less my life, because I am out.’

That said, we have a long way to go. I have a very comfortable life, but I need to keep in mind that this is not true for many others, and that what I consider “comfortable” is probably still not good enough.

It is surprisingly easy to start believing that things are fine just because I am not in danger of losing my job, much less my life, because I am out.

Surely we should have higher standards than that, including a workplace and society free of sexism and heterosexism, transphobia, racism, classism, ablism and all of the other “isms.”

MC: When you say we have a long way to go, what do you mean, more specifically?

EM: For me personally, there’s a lot of examples that remind me of overlapping discrimination with sexism, subtly and not so subtly. An example is microaggessions – the little things that add up.

I’m in a privileged position, I look like a straight, white woman, so I “pass.” I’m very comfortable, I can’t be fired and I get along with my family. If I didn’t, I might have trouble. There are plenty of people in that situation.

‘When I saw the call over Newsline, I thought, “I should probably do this.” Because I can.’

I do outreach and advising in elementary schools and high schools and I notice there is a lot of inclusive messaging in the schools and not so much here on our campus. Some schools are actively welcoming, so a person doesn’t have to have their guard up.

What’s that like for a young person who is figuring out their sexual orientation? Without the active messaging, you never know if you’re in a safe space.

MC: Why did you volunteer to be profiled in the Gazette for a Pride story?

EM: When I saw the call over Newsline, I thought, “I should probably do this.” Because I can.

I don’t necessarily want to be the one always talking about the “gay stuff” – I’m waiting for another colleague to pipe up. So for now, if I don’t, who will?

MC: What does Pride mean to you?

EM: Pride means joy and celebration, and it also means hard work and standing up for myself and for others.

MC: How has Pride changed over the years that you’ve noticed?

EM: The part I love is all the children and families participating, especially in the parade to Bannerman Park in St. John’s. There’s a lot of joy! Though I think we need to maintain the balance – it’s great to celebrate, but we still have a long way to go.

There is a lot of commercialism happening in larger centres like Toronto in association with the parades and things like that, but the movement needs to be challenging. We have to have the counter-cultural challenge. I feel like I still have a lot to learn.

MC: How will you be celebrating Pride this month?

EM: I am part of Spectrum Queer Choir,  a community choir open to all, and we will be singing at the flag raising at the Confederation Building.

Dr. Erika Merschrod is a professor in the Department of Chemistry, Faculty of Science, where she has been on faculty since 2003. She teaches a broad range of classes, from first year to graduate level, and heads a materials science research laboratory, where students develop multifunctional thin films with applications ranging from bioactive scaffolds to environmental sensors. She can be reached at erika@mun.ca.

Mandy Cook is news editor with Marketing & Communications. She can be reached at mandyc@mun.ca.