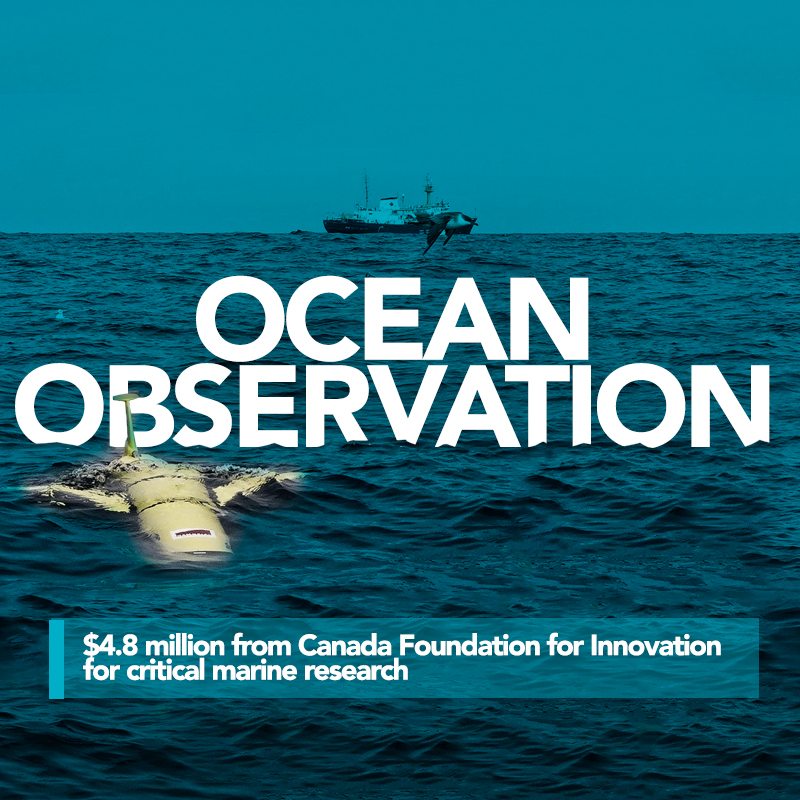 $4.8 million from Canada Foundation for Innovation for critical marine research

Memorial University has received a major award from the Canada Foundation for Innovation (CFI) for its development of autonomous marine observation systems (DAMOS).

The 2017 Innovation Fund (IF) awards, announced on Oct. 12 in Winnipeg, Man., by Kirsty Duncan, minister of Science, must illustrate global leadership, partnerships and benefits for Canadians.

The DAMOS project, co-led by Drs. Brad deYoung and Ralf Bachmayer, includes experts at Memorial in physical oceanography, ocean engineering, earth sciences and ocean sciences, as well as partnerships with Dalhousie University, Fisheries and Oceans Canada and a number of industry partners.

The IF award of $4,838,514, with co-funding from project partners, will fund a total project valued at $13,178,299 to develop infrastructure at Memorial and at Dalhousie.

The funding will be used for equipment and software to examine critical oceanographic and biological processes.

The researchers will develop and deploy marine instrumentation that will transform Canadian capabilities to monitor and understand ocean phenomena and will support growth of the Canadian ocean technology sector.

The core DAMOS team, which includes researchers from Memorial, Dalhousie and York University, as well as other partners from industry and government organizations, aims to shape the future of Canadian ocean observation.

By using mobile autonomous vehicles and fixed autonomous sensor systems, the DAMOS team, together with their broad network of colleagues and collaborators, will be able to collect oceanographic data in places that are currently inaccessible and report that data in real time.

“We have been working in the Labrador Sea . . . but have been limited because ships cannot go there in the winter.” — Dr. Brad deYoung

While some of the instruments are commercially available, other new systems will be developed in the DAMOS program, thus increasing the coverage, range and capability of DAMOS’s mobile North Atlantic Ocean observation system.

For example, new acoustic receivers will be positioned across key migration routes of fish, such as cod, halibut, and Atlantic salmon.

“We have been working in the Labrador Sea, trying to understand how gases are exchanged between the ocean and the atmosphere, but have been limited because ships cannot go there in the winter,” said Dr. deYoung, DAMOS co-principal investigator and professor in physics and physical oceanography, Faculty of Science.

“With this instrumentation we will be able to make measurements that are simply not possible at present,” Dr. deYoung continued.

“In addition, we will work closely with Fisheries and Oceans Canada to develop, test and deploy infrastructure components that will support the Government of Canada’s long-term research and monitoring programs and contribute to the Atlantic node infrastructure for the planned Canadian Integrated Ocean Observing System.”

“This infrastructure project will lead to the development of new autonomous vehicles with advanced sensor capabilities for testing on the Newfoundland and Labrador shelf,” said Dr. Greg Naterer, dean, Faculty of Engineering and Applied Science, Memorial University.

“It will have important applications in the offshore sector, for example, with new acoustic systems to map zoo plankton and fish for mapping populations, as well as gas mixing and noise from ships and offshore platforms.”

The knowledge gained from the DAMOS program will help scientists, engineers, managers and policy-makers respond to a changing ocean, directly impacting biological marine resources on which Canada’s coastal communities depend.

“The DAMOS team will provide a powerful, agile, interdisciplinary, ocean observing system that will research the influence of Arctic changes on the critical climate-related processes and valuable ecosystems of the Northwest Atlantic, from Nova Scotia to Labrador.”

The Canada Foundation for Innovation announced more than $554 million in 117 new infrastructure projects at 61 universities, colleges and research hospitals across Canada through the Innovation Fund. The DAMOS project is one of two IF projects at Memorial to receive funding — read about the Harsh Environment Research Facility funding announcement here.