Memorial Faculty of Education students in Labrador are contributing interactive lessons in which students learn about Nunatsiavut and its people as part of the Canada C3 digital classroom.

The classroom is a key part of the C3 marine expedition.

Third-year students in the Inuit bachelor of education (IBED) program in Labrador designed lesson plans on topics, such as Inuit hunting and gathering, traditional knowledge of the land and environment, and expressing their relationship to the land through music.

To date, five of those plans are included in the Canada C3 Digital Classroom, a national K-12 teaching resource available to teachers across the country during and after the expedition.

“Teachers and students alike will learn about Labrador,” said Dr. Sylvia Moore, assistant professor, Faculty of Education, who is based at the Labrador Institute in Happy Valley-Goose Bay. “The lesson plans are totally amazing. They combine Newfoundland and Labrador curriculum outcomes with Inuit culture and land. It’s very place-based material.”

The Canada C3 voyage from Toronto to Victoria via the Northwest Passage is an initiative of the Students on Ice Foundation, a national organization that has led educational expeditions to the Arctic and Antarctic since 2000. Canadians from other walks of life are taking part in the 150-day voyage aboard a research icebreaker.

On July 19, the ship arrived in Rigolet and the IBED students were there to meet the C3 participants. They spent time with an Inuit elder, explored the Labrador town’s 8.4-kilometre long boardwalk, toured the icebreaker and dined with the C3 participants and community members on salmon cakes, “flummies” (fried bread) and red berry jam.

Dr. Moore and Memorial students Tracey Doherty and Julie Flowers gave presentations and a slide show on the IBED program and the Nunatsiavut lesson plans that are part of C3 digital classroom.

“People were happy to hear that the students are contributing knowledge that can be taught across the country,” said Dr. Moore. “It really helped the students understand they were part of something much bigger.”

The IBED students were required to do the Nunatsiavut lesson plans for one of their courses, and Dr. Moore suggested they submit these plans to the Canada C3 project. It was optional, but they would receive extra credit for the extra work.

Knowing their lesson plans would be reviewed by professional teachers across the country was a bit “anxiety inducing” for the students, but Dr. Moore says they all took up the challenge.

Doris Boase, an IBED student from Hopedale, devised a lesson plan on hunting and gathering to help students learn more about their culture and environment and demonstrate this understanding through artwork to be shared with their community in Heritage Fair displays.

“Hunting and gathering is a daily experience for Inuit. It’s an important part of life,” she said. “The children will be drawing on a lot of prior knowledge, as well as talking to people in their community — their parents, aunts or uncles, elders.

“I took it from an Inuit perspective, but it could be done anywhere because hunting and gathering is practised by so many people and in so many different ways,” she added.

The lesson plan focuses on hunting traditions, the types of animals hunted, the seasons and how hunting tools and transportation have changed over the years.

She says non-Indigenous students could also learn from the learning module.

“I think they’d gain insight into the struggles that we do have . . . with different moratoria, the cost of living and why hunting is such an important part of our lives.”

Living in the Narrows

Ms. Doherty, a Nunatsiavut beneficiary who was living in Calgary, has family ties to Rigolet.

Her learning module – Living in the Narrows: Mapping our Kinship with Land, Water and Ice – is a year-long lesson that includes a summer Aullak, the Inuktitut word for “on the land excursion.” The summer excursion would take students to an island in Hamilton Inlet that was the winter home of the Inuit from 1600 to 1900.

“I did a small internship in Rigolet and a lot of the kids are hunting and are familiar with going off on the land, so I think they’d appreciate that as an activity,” she said.

Located near Rigolet, The Narrows and its estuary connect Lake Melville to Groswater Bay. It’s considered an important water corridor for locally important species, such as Atlantic salmon and ringed seals.

Ms. Doherty says her lesson plan was inspired by research led by Dr. Keith Chaulk, a former director of the Labrador Institute, who collaborated with local knowledge keepers in a marine mammal observation program near Rigolet.

“Part of the activities with the kids would be having one of the elders or knowledge keepers who was involved in the study come and help us learn how to count an animal species and tell us about their experiences going out to view mammals and the environment,” she said.

The students also create a map of their findings, including ice conditions and seal habitat – something Ms. Doherty had an opportunity to do with school children. The Narrows map is being finalized for inclusion in Canada C3’s giant floor map of the marine expedition.

Song of the Land

Ms. Flowers, who is from Rigolet, created three lesson plans that have been included in the C3 digital classroom.

Song of the Land, which takes its title from a song of the same name by Susan Aglukark, focuses on listening to song lyrics that express love for northern lands.

“The lyrics are perfect and if you’re trying to learn about the land and see it from another Inuk’s perspective, it’s perfect,” she said.

As part of the lesson plan, students draw pictures depicting a verse from the song, create their own verse, translate a verse into Inuktitut or create a dance for the song. One of the outdoor activities is a nature walk where students quietly observe and listen to their surroundings.

“From my own personal experience in school, having the participation part was a big part in learning . . . so I really wanted to include as much of that as I could.”

The Caribou in the Arctic lesson plan centres on the importance of caribou to Inuit and other Indigenous people, and the Inuit knowledge of the different caribou herds, behaviours, diet, calving grounds and migration routes.

Where Do We Inuit Live? introduces students to the Inuit regions of Canada, why the Inuit inhabited and continue to live in the North, and how they’ve adapted to life on the North Coast. A map from this lesson plan has been contributed to the Canada C3 floor map.

While Ms. Flowers is happy her lesson plans are included in the digital classroom resource, she has mixed feelings about the Canada C3 project being part of the Canada 150 anniversary celebrations.

“I do wish that the digital classroom had come about in a different way,” she said. “Other than that, I really enjoyed it and I hope that people can get a lot from the lesson plans.”

She didn’t attend Canada Day functions, but was on hand when the C3 ship visited Rigolet.

“I’m proud to be there with my community members and be at home and know that I was able to contribute my lesson plans.”

Ms. Doherty describes the Canada 150 celebrations as a paradox.

“I’m kind of refocusing it in terms of still needing to honour that my ancestors were here before 150 years ago,” she said. “That was certainly in the lesson plan – Canada didn’t exist when our ancestors inhabited Henrietta Island. I think the North is so obviously a place that should be celebrated. It’s so beautiful.”

The Canada C3 expedition included 13 stops in Newfoundland and Labrador and the last provincial stop is Nain on July 22 and 23.

The C3 voyage is scheduled to wrap up in Victoria on Oct. 28.

The Memorial community has been actively involved in the C3 voyage. For more information, read Sesquicentennial voyage and Chancellor sets sail. 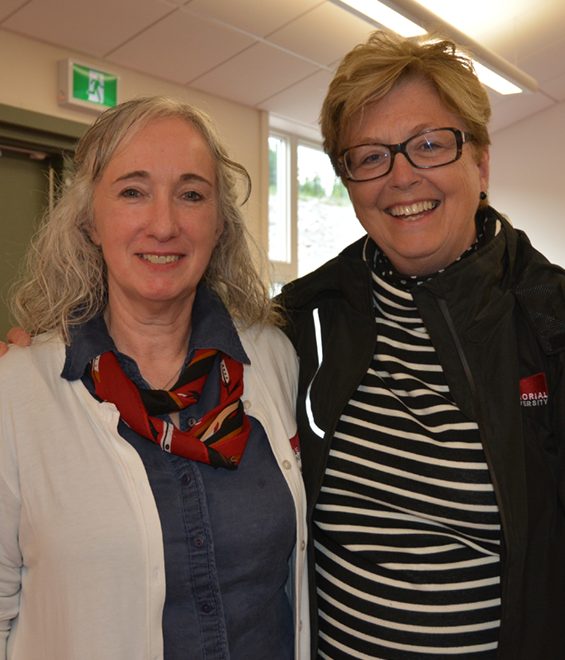