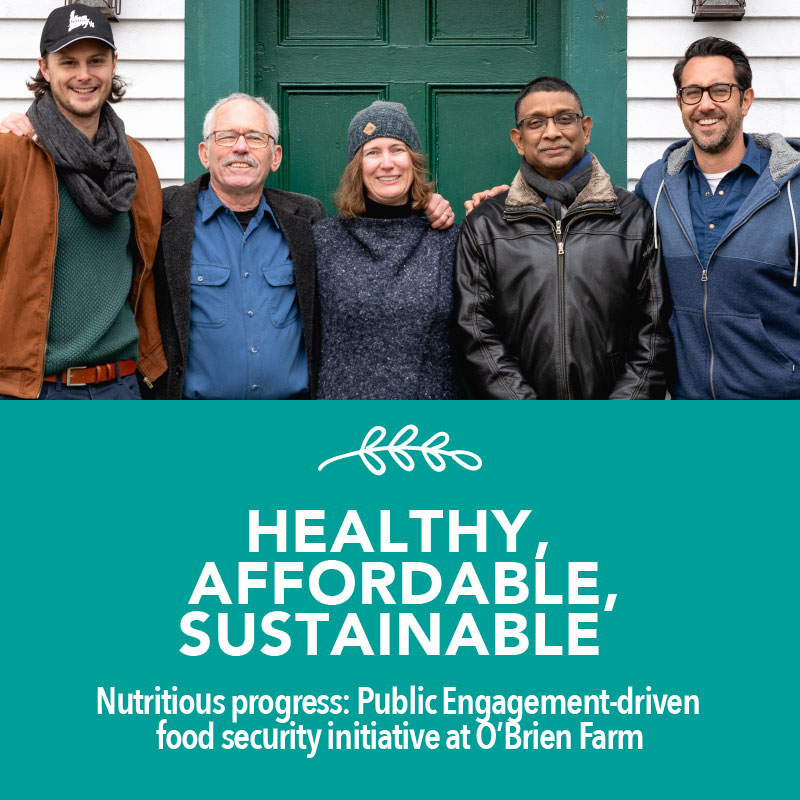 Think of it as the offspring of a greenhouse and a root cellar.

And with the provincial government’s The Way Forward Plan calling for a doubling of local food production by 2022, the timing for the initiative could not be better.

Thanks to $10,000 from the Office of Public Engagement’s Accelerator Fund, the project will build on two earlier phases of design work and public consultation. The team will also construct a demonstration model of an earth-sheltered greenhouse, already designed by engineering students from Memorial University, at the historic O’Brien Farm in Pippy Park in St. John’s.

“I got chills up my spine,” said community partner Dan Rubin, of the moment he heard that the O’Brien Farm was confirmed as a partner. “We couldn’t ask for a more appropriate site.”

A neighbour first introduced him to the idea of an earth-sheltered greenhouse, a structure adapted to cold climate sites often built into the side of a hill using the earth for insulation.

Mr. Rubin was unable to get the project off the ground in Pouch Cove; ultimately, he found his way to Memorial University’s Botanical Garden.

They’ve both been active committee members since the start of the project’s second phase in 2018.

Another key partner is Dr. Atanu Sarkar, Division of Community Health and Humanities, Faculty of Medicine, who is also on the garden’s academic advisory committee.

“The provincial government is spending money on health, but we remain unhealthy.” — Dr. Atanu Sarkur

Dr. Sarkar’s interest in environmental health includes a firm belief in the importance of holistic health care and in Benjamin Franklin’s adage that “an ounce of prevention is worth a pound of cure.”

Food security is defined as a sufficient quantity of healthy, affordable, sustainable food. As one of Canada’s unhealthiest provinces despite having one of the largest per capita health-care budgets, Dr. Sarkar maintains the connection between health and food security is unavoidable.

“The provincial government is spending money on health, but we remain unhealthy,” said Dr. Sarkar, who recently co-edited a book on sustainable global food security. “A good healthy diet is the best prevention against disease.”

Fast forward four months and three co-operative education students from the Faculty of Engineering and Applied Science completed their design of a 240-square foot structure that cost less than $5,000 in materials with the capacity to be heated to 10 C year-round for less than $500.

The second phase consisted of a series of five themed workshops held at the Botanical Garden, facilitated by Mr. Rubin and project co-ordinator, Etienne Chaytor.

The two gathered a number of perspectives by using visual recordings of each participant’s ideas.

That was key, according to Mr. Chaytor, an aerospace engineer originally from Montreal, who incorporated his knowledge of complex communications processes into the meetings.

“I see this as a long-term project focusing on change management in how people perceive food growing and production,” he said. “We need to have tools that are easy to re-use in order to measure the project’s status.”

“Now that we have enough knowledge and enough people to contribute, we need to start getting our hands dirty,” said Dr. Sarkar.

“It’s really exciting to create a bit of a cluster here on Mount Scio, and I’m sure it’s the first of a number of initiatives we will be able to work on together.”

According to Aaron Rodgers, the O’Brien Farm manager, the greenhouse will be built in what was traditionally known as the Meadow Over the Pond (overlooking Oxen Pond).

“One of the beauties of this project is how it fits with our environment,” he said. “We have 30 acres but it’s not all arable land. We do, however, have a lot of hills and hillsides which are difficult to farm on. This project allows us to use those spaces.”

According to the committee, the earth-sheltered greenhouse is more than a simple growing space; it’s a “Swiss Army knife” of a structure, capable of both growing food and boosting community health while helping communities develop socially and economically.

For Mr. Rubin, the greenhouse is only the beginning. Next steps include a food producers’ website, monthly forums at the Elaine Dobbin Centre for Autism and a consulting team to assist and advise communities in implementing the greenhouse technology.

“This project would not have happened without support from the individuals and groups who share our deep concern about the sustainability and quality of our food,” he said.

“Partnering with the School of Engineering and Applied Sciences, with Atanu in the School of Medicine, with Kim at the Botanical Garden, with Aaron at the O’Brien Farm and, most critically, thanks to two rounds of financial support from the Office of Public Engagement, the earth-sheltered greenhouse is turning into a reality. By doing this, we are helping restore food security to our province. How wonderful is that?”

A launch for the project is planned for Saturday, Dec. 14, from 1-3 p.m. in the new greenhouse at the Elaine Dobbin Centre for Autism, 70 Clinch Cres., across from the Health Sciences Centre in St. John’s. Anyone interested in where their food comes from and how the province’s growing seasons can be expanded is invited to attend. Please RSVP by email.

More information on the project can be found online.