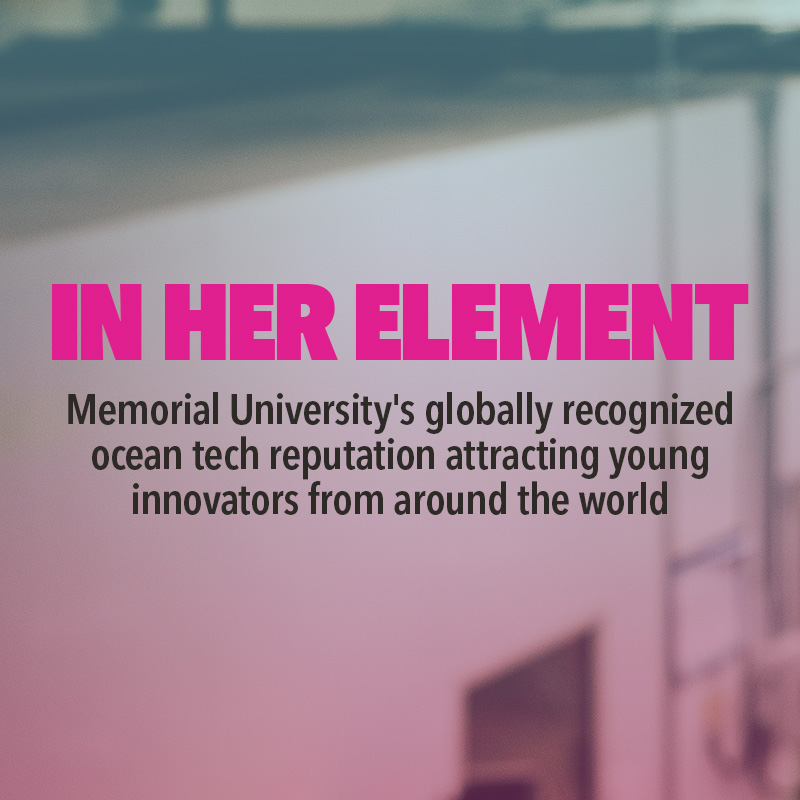 It’s quite the contrast, but her new ocean surroundings are providing her with a wealth of opportunities.

The PhD student at Memorial University of Newfoundland is leading an innovative research study focused on better understanding the dangers posed by sea ice to ships and off-shore structures.

“When I decided to continue my studies abroad, Memorial was one of my first choices,” said Ms. Boroojerdi, whose background is in marine hydrodynamics.

“I was fascinated to learn about Memorial’s leading role in cold oceans and harsh environment engineering. I was drawn to Memorial for the opportunity of conducting experiments in the Faculty of Engineering and Applied Science. Without a doubt, I have loved every moment of it.”

Despite not knowing much about Canada’s rugged East Coast, it’s no surprise Ms. Boroojerdi ended up at Memorial.

Home to one of North America’s top ocean and naval architectural engineering programs, Memorial is the only Canadian university to make the list of the world’s top post-secondary institutions for the study of marine/ocean engineering.

Memorial placed 38 among global universities ranked in the engineering field as reported by the Shanghai Ranking Consultancy, which included 44 top universities in its marine/ocean engineering listing.

The university’s physical location — on the edge of the North Atlantic — provides a rich, living laboratory right outside its door where the cold waters of the Labrador Current meet the warm Gulf Stream. In fact, more than 40 per cent of Memorial’s research is ocean-related, which means if there’s research happening in the North Atlantic, Memorial University is likely involved.

That natural setting provides the perfect environment for emerging innovators like Ms. Boroojerdi to think big.

After completing a master’s degree in naval architecture-marine hydrodynamics in her native Iran, she was drawn to Memorial for the opportunity to conduct experimental work at the world-famous labs in the Department of Ocean and Naval Architectural Engineering in the Faculty of Engineering and Applied Science.

Now, she studies the bonds that form between chunks of ice, as part of a team working to improve the safety of ships and oil rigs in Arctic and sub-Arctic conditions.

Ms. Boroojerdi says she’s confident the new knowledge and expertise she’s gained from conducting her research at Memorial will open doors in the future.

“This has significant importance in the design of ships and structures operating in ice-prone regions, where first-year ice ridges govern the design loads for these structures. Freeze bonds are known as one of the controlling factors in ice ridge and rubble failure. The processes affecting the strength of freeze bonds between ice blocks and how they contribute to the overall ice ridge strength, however, need further investigation.”

In 2018-19 the Canada Foundation for Innovation selected Ms. Boroojerdi to be featured in a print, video and online promotional campaign highlighting a new generation of researchers who have chosen Canada to build a future.