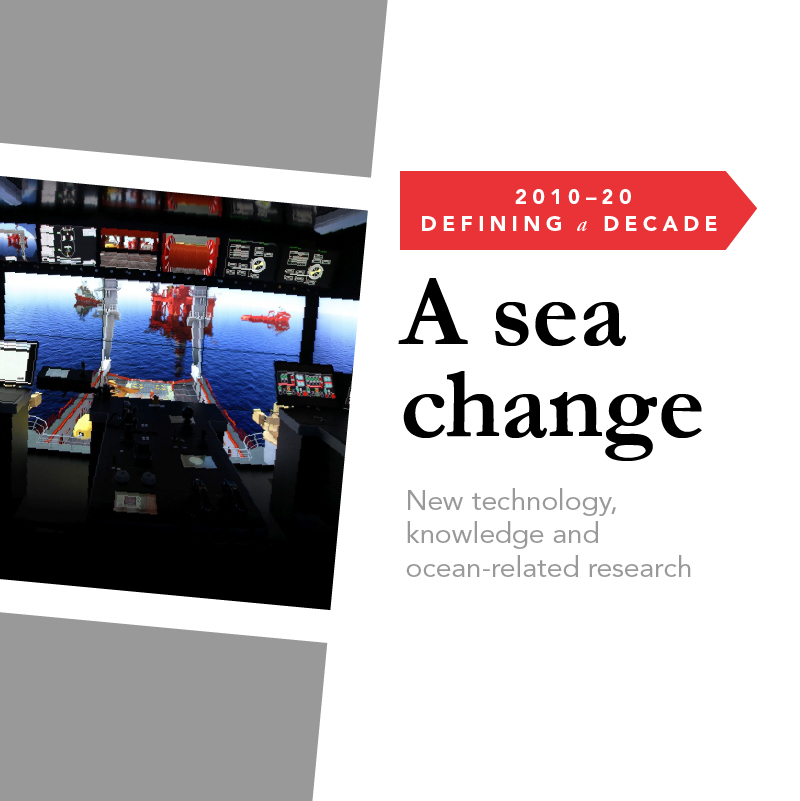 If the past 10 years have proven anything, it is that Memorial researchers have a strong connection to our world’s ocean.

In fact, more than 40 per cent of our research is ocean-related.

Multidisciplinary teams are leading critical studies focused on the water that surrounds us, helping solve industry challenges and create new knowledge. With longstanding global partnerships, they have been able to enhance their studies.

These efforts also boost Memorial’s international reputation for leading-edge ocean research. For example, in 2018 Memorial was the only Canadian university to make the list of the world’s top post-secondary institutions for the study of marine/ocean engineering.

Memorial is also playing a central role in advancing ocean exploration and discovery through the Ocean Frontier Institute (OFI).

Launched in September 2016, OFI is an historic partnership between Memorial, Dalhousie University and the University of Prince Edward Island where researchers are focusing on solutions for safe and sustainable ocean development.

Heading into a new decade, Memorial remains at the forefront of ocean innovation, with unmatched research strengths relating to our world’s ocean.

Initially announced in early 2009 and expanded over the past decade, this project developed design and assessment tools for ships and offshore structures in the Arctic.

Led by globally respected Dr. Claude Daley from the Faculty of Engineering and Applied Science, Sustainable Technology for Polar Ships and Structures (STePS2) significantly improved the understanding of high energy collisions between sea ice and steel structures, while gaining an improved knowledge of the resistance and/or failure characteristics of man-made structure under high loads from ice.

A Memorial-based research initiative that has grown to include hundreds of international collaborators and organizations got its start in October 2012.

Too Big To Ignore: Global Partnerships for Small-Scale Fisheries is led by Dr. Ratana Chuenpagdee from the Department of Geography, Faculty of Humanities and Social Sciences.

Dr. Chuenpagdee champions the multidisciplinary collaboration of more than 450 researchers and 20 organizations from approximately 55 countries to elevate issues and concerns affecting viability and sustainability of small-scale fisheries.

In the fall of 2015, Dr. Chuenpagdee was shortlisted for the prestigious Social Sciences and Humanities Research Council Impact Award in recognition of her groundbreaking work on small-scale fisheries.

Improving operational safety and effectiveness in harsh offshore environments has been the focus of Dr. Brian Veitch’s research over the past decade.

Dr. Veitch, a researcher from the Faculty of Engineering and Applied Science, is the current NSERC/Husky Energy Industrial Research Chair in Safety at Sea. He focuses on improving offshore safety of human and workplace performance while at sea.

Dr. Veitch has a strong practical perspective to his research program, using simulators that he and his team have developed as virtual marine environments to investigate human performance in offshore settings.

The Fisheries and Marine Institute celebrated the opening of its Hibernia Offshore Operations Simulator Facility in October 2015. The new simulator provides offshore operators with advanced and customized training for the supply and support of offshore facilities and production platforms.

The simulator is housed at the institue’s Centre for Marine Simulation (CMS) in a new two-storey facility, which includes a six degree of freedom motion platform that replicates a wide range of at sea conditions and vessel vibrations, a visualization system to represent offshore operations in real time and an instructor station to co-ordinate and oversee training scenarios.

Complementing this initiative was a donation, in December 2019, of a ship’s bridge simulator from Teekay Offshore, which allows CMS to expand its capacity for state-of-the-art offshore and maritime simulation training in Newfoundland and Labrador.

The Heritage Bridge Simulator, manufactured by Kongsberg, is a class A ship simulator configured to the bridge design of an offshore shuttle tanker, complete with a dynamic positioning system.

Back in 2016, the Gazette reported on a project led by Dr. Robert Brown from the Marine Institute’s Offshore Safety and Survival Centre Research Unit. He and his team were testing personal locator beacons — devices worn by offshore workers to help locate them quickly should they find themselves in the ocean.

Part of his research involved improving our understanding of how these devices work in realistic conditions. The team provided guidance to manufacturers, regulators and industry.

Their research is emblematic of the innovative research led by Memorial in an effort to help improve emergency response for all people who work and play at sea.

Faisal Khan is bolstering Memorial’s research profile when it comes to ocean-related research. Back in May 2017 Dr. Khan was named a new Canada Research Chair in Offshore Safety and Risk Engineering.

His research, which focuses on offshore operations in harsh environments, is pursuing ways to help industry evaluate the impact of its activities on both humans and offshore infrastructure, to ensure safe operations in challenging conditions and remote locations.

In 2017  the Marine Institute’s Centre for Fisheries Ecosystems Research (CFER) received $4.7 million from the federal government’s Coastal Restoration Fund for a five-year project to help restore the ecosystem in Placentia Bay, N.L.

Led by Dr. Arnault Le Bris, 20 reefs have been deployed in Placentia Bay so far, with others scheduled for Northeast Arm, St. Joseph’s and Baine Harbour. Each site will also be targeted for the restoration of nearby eelgrass beds.

MI partnered with Fisheries and Oceans Canada, the Miawpukek First Nation, fishing industry stakeholders and local communities to rehabilitate eelgrass habitats and associated fish and shellfish resources in the coastal waters of Placentia Bay with the goal of sustainable fisheries and healthy ecosystems for years to come.

This story is part of Defining a Decade, a new feature in the Gazette for the winter 2020 semester. Stay tuned for stories on Tuesdays and Thursdays about the accomplishments, achievements and impacts that defined Memorial’s last 10 years. The full list of stories published to-date is available here.